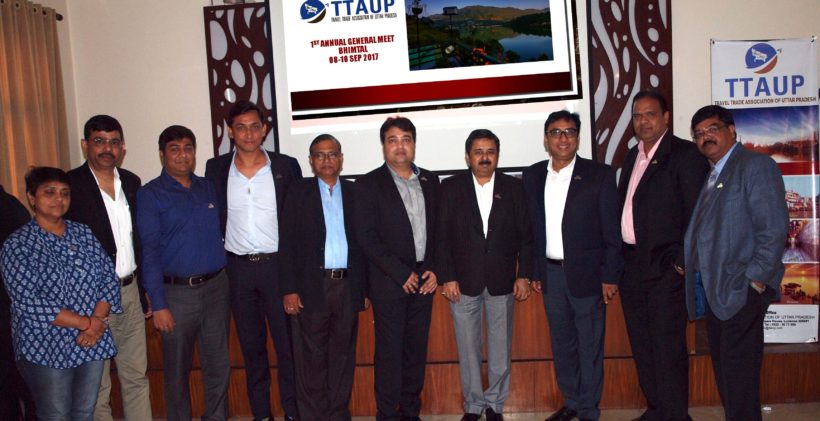 The 1st Annual General meeting of TTAUP 2016-17 was organised at Harshikhar Hotel, Bhimtal on 9th September, 2017. The event was attended by around 70 eminent travel professionals, 11 airline officials and various other travel trade consultants. The meeting was commenced by Mr Naeem Khan, General Secretary, who elaborated upon the objective of TTAUP and the association’s achievements during the year and also apprised everyone with the list of upcoming events. He shared with members and travel partners future plans of TTAUP.

Mr Rajiv Arora, Treasurer, spoke about the financial aspect and stated that most of the TTAUP events have been supported by trade sponsors.

In absence of President, Mr Vivek Pandey; Vice President, Mr SM Akhlaq Sheeraz explained that the aim of TTAUP is to update all trade partners with the new technical developments and help them broaden their horizons with regard to the same. Uttar Pradesh has now evolved as a highly potential market and is being considered one of the major productive targets for sales by trade partners who have begun migrating from their saturated tier I cities to tier II cities. TTAUP has been helping these trade partners by creating a platform for them.

Later Mr. Vikas Khanduri gave a talk to the gathering about changing scenario in Travel Business and how to gear once business to compete with the online travel portals. He also elaborated on how to enhance our sales and marketing by making best use of online technologies and importance of customer relation management.

In the closing ceremony, mementos were handed out to all airline officials, trade partners and TTAUP Members. Post the presentations and annual meeting, all delegates participated in team- building activities at the venue which was thoroughly enjoyed by everyone. All members and participants highly appreciated the overwhelming hospitality extended by Ms Neha Singh Managing Director of Harshikhar Hotel.

The last evening at Bhimtal was a musical dinner which was very entertaining and all members danced their way into the night. There was a late evening lucky draw and many members and trade partners were distributed attractive prizes apart from mega prize for the winning team of the team building exercise.

There were members present in the AGM from all over UP including Varanasi, Agra, Meerut, Lucknow and Kanpur to name a few.

Overall, the TTAUP AGM was a huge success and we look forward to participation in our upcoming events.